The Contribution of Aldus Manutius, the Printer, as well as the Origins of the Book

So many writings, so many words, so many poems, tell me how these came to you? That's right. ‘Books’. A book has conveyed these to you. But where did the book come from? How the book's life began is an interesting question.

To find the answer to your question, we have to go back hundreds of years. The first stage of writing began in Egypt. Then the printing press was started in China. A Chinese priest named Kei Lan used it to imprint the words of religious great men.

In 1538 a man named Johannes Gutenberg brought a portable printing press to Europe for business. In Venice, Italy, a riot broke out at that time. Dedar started printing any announcement all over the city.

Little by little the people of this city began to speak out for their rights in order to have freedom of expression, which was carried by this printing press. Different types of typography are created to keep pace with different types of printing. Typography refers to writing a language in a variety of ways.

Being on the shores of the Mediterranean Sea created commercial potential in Venice at that time. Due to the increase in income opportunities, businessmen, artists and wise people from all over the world keep coming to Venice.

One of them was Aldas Manutius. The man, from the city of Basiano in Rome, moved to Venice. He was attracted to the opportunity of free knowledge in Venice. That is why he started Aldin Press.

In 1495 Manutius published his first book as a publisher. It was Eratomata, a book written by language researcher Constantine Lascaris. Many historians say that it was Manutius' efforts that made the book popular throughout Europe.

Although the wise man did not have his own printed name on the pages of the book, Manutius took his place in the pages of history in another way. He was not only a wise businessman but also a dreamer.

While all publishers are printing books on giant sheet paper, Manutius first thought of printing small books. Manutias wanted the reader to keep the book with him at all times. He divided the sheet paper of that time into eight parts and published books in that size.

He named the book "Formato in Atavo". We now call this shaped book Paperback. But those paperbacks are small books on foreign red paper. Due to the small size of the weight loss books printed in Europe began to spread easily around the world.

Manutius tries in various ways to give the reader all the benefits. This time his eye fell on typography. Since Gutenberg's time, the press has printed books in a thick font called the Gothic type. But Manutius used a special font called 'Aldino' in his press.

It had thin spots. After several years of trying, Manetius Aldino, in collaboration with Francesco Griffio of Italy, gave the font a new look, which is now the Italian font. He noticed that the font was thin and light. More words can be printed using this font in less space in the book. 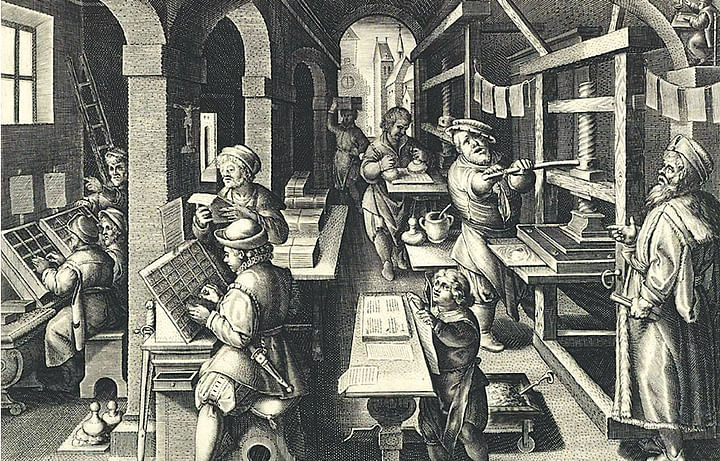 Aldino Font and Formato in Atavo combined to spread the book to the world. Before that the book was in the aristocratic house. But Manutius, at a low price, printed portable books, opened the way for the pursuit of knowledge for all.

People of all ages began to read more or less books. He was followed by publishers such as The Sissy, The Guenta, The Scotto and The Geolotto. In the 15th and 16th centuries, about 250 printing presses, large and small, were established throughout Europe, publishing about 25,000 books. Europe became famous all over the world as the lifeblood of knowledge.

Knowledgeable people, editors, writers, translators and people of various professions used to gather in Venice. In the middle of the fifteenth century, it became the largest and richest center of learning in the world.

People of different races, languages, castes, tribes started to become one here. Through their combined efforts, the world's leading literary, research and philosophical books have been translated into Greek, Hebrew, German, Arabic, Armenian and other languages.

Among them, the Armenians became most familiar with the printing press. They were able to make these machines easily because they became technically rich. They started spreading this knowledge among everyone. These Armenians still run many printing presses in Venice.

Every year many of them are learning how to make books, make covers, print the words of history. That is why the manuscript of history still survives among them.

effects of covid on gen z: why youngsters also got affected by Corona?

The Damage That Smartphones Are Doing To Us Insects are our friend on the one hand and a formidable enemy on the other. This... We feel gloomy in colder seasons than the sunny days. Have you noticed it? Artificial moon in the sky of China

Today we are going to talk about the Artificial moon in the sky of China. This amazing... Giulia Tofana poison is the main focus area over here. We will know this Giulia... A new study has found that when a white dwarf star explodes as a supernova, it could... Virtual reality has reached a new dimension and far to go.